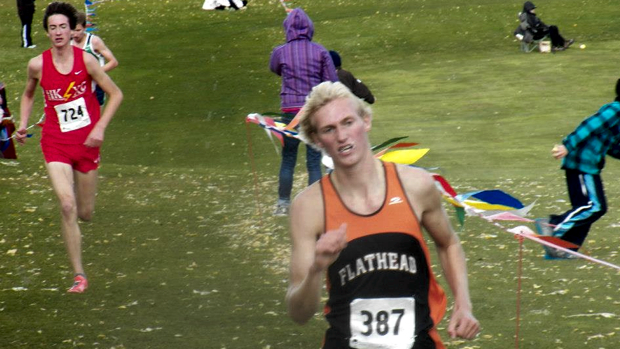 Perrin leads the charge with Peterman in pursuit in Class AA.

Zach Perrin (Flathead) raced well when it mattered and came away with a state title, beating out several talented runners in the process.  Zach crossed the line in 15:08.70, 9 seconds ahead of Adam Peterman of Missoula Hellgate in 15:17.60.  Troy Fraley (Glacier) finished 3rd with a time of 15:25.00.  Bozeman took the team crown with 56 points and an impressive spread of 42 seconds.  Missoula Hellgate was the runner-up with 97 points and Billings West nabbed the last podium spot with 125 points.

Zach Perrin added the following statement about his senior year of XC in Montana: "The season was fantastic! It meant everything to be able to represent my school and the flathead tradition and end the fhs xc career with a win. I'd like to say thank you to my fantastic team, coaches, family and friends. God is good and he has blessed me with so many great things in life, i just feel so fortunate for the position that i am in right now".

Paige Gilchrist (Missoula Hellgate) dominated with a winning time of 17:47.00, 51 seconds ahead of runner-up Rachel Jones (Billings West) in 18:38.10.  Sabrina Sterbis (Missoula Big Sky) was 3rd with a time of 18:55.70.  Bozeman completed the AA team sweep by winning with 55 points.  Billings West was 2nd with 72 points and Billings Senior was 3rd with 95 points.